skip to main | skip to sidebar

Whitecross Street, EC1. Running from just beyond the Barbican complex to St. Luke’s Church at Old Street, it’s half a kilometre long, a fairly plain looking mix of commercial and residential properties. Walking down the street, you immediately gather that, while this is a street that has seen better days, it is dragging itself out of the mud, washing the muck off itself and adopting a veneer of respectability. This is the Whitecross Street of 2010; 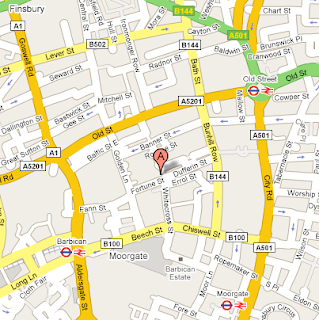 “The whole neighbourhood is pervaded with a miasma of grinding, unwholesome, sullen, and often vicious poverty. Everything is cheap and nasty, and the sellers seem as poor as the buyers. There are shops whose stock in trade is not worth half a dozen shillings. There are passers-by, the whole of whose apparel would certainly be dear at ninepence. Chandlers' shops, marine-stores, pawn-shops, and public-houses, occur over and over again in sickening repetition. There is a frowsy blight on the window-panes and the gas-lamps. The bread is all seconds; the butchers'-shops, with their flaring gas-jets, expose nothing but scraps and bony pieces of meat. Inferior greengrocery in baskets chokes up the pathway; but it looks so bad that it would be a pity to rescue it from its neighbour the gutter, and its legitimate proprietors, the pigs."

The modern and stylish shops that now dot the street seem to me to be a kind of disguise adopted by the street to conceal its past. A past of blood, chaos, treason, confinement, rape and infanticide. It is poverty and the desperate want for a better life that best defines Whitecross Street’s past.

Continued in Part 2
Posted by londoncitynights at 6:46 AM